A downloadable game for Windows

JICE is a first person platformer, set in a ruined candy factory.

Find your path to the end in the fastest way possible using wall running, jumping and more! Avoid or destroy hostile robots and keep your energy level at check - if it drops too low, you won't be able to go as fast.

i love platformers and i love fps thanks

This game has so much potential. if you actually put this game into steam, it would have a lot downloads. And you would also earn from your game

This game looks amazing I was wondering if you where planning on expanding on it. Like maps, obstacles, guns ect. I have ideas. Like a forgery with hot molten metal everywhere to avoid and having dragons to shoot, that shoot fire balls. and platforms too hot to land on, And a boss battle to end it all that you can shoot with the gun that comes with the level called the hot shot or something else. I have a lot of ideas for the game and this is just one of them.

We are indeed planning on expanding the game! So far we have some ideas for new objects and levels, following the same style and thought of the first level.

Karlson but its midair

Do you guys have a discord/Patreon? I love the game and would love to give you guys a bit of money to go towards development :)

We don't have anything like that at the moment, but we really appreciate the thought!

i tried playing it, wouldnt load... i downloaded it but the game's not working, was really looking forward to play.

Sorry to hear that! What graphics card do you use? We haven't determined what minimum requirements our game has yet, so any info will help us.

i think its intel(R) UHD Graphics im not sure

i played this and i really wish it was longer! the bit of gameplay it had i really liked tho, the graphics were really clean and i liked the music,the world is creative with it i think being run by robots and this taking place in a candy factory,laslty i liked how you could go different ways, it gives the game replay value and the thing where you can shoot robots is cool, nice job!

Thank you for the detailed feedback! We are glad you liked it.

wanted to say everything i liked! and npp

There are no settings to change quality for now, but the game will most likely run okay on a medium pc. Have you tried it?

I might be biased for the colors pink and white but this game is beautiful and i love platforme games just jumping from wall to wall gets my hype im trying to say great game.

can we have somethings to have command for azerty keyboard?

Shooting feels like pointing lazer. Game can be better if weapons acts better.

I like the art style! All the objects in the level are well crafted. The controls feel nice which is a big plus.

Dropping into the main level was very daunting. The level provided no sense of location or progression. I felt lost since all I saw in front of me was a cluster of objects. I noticed differents paths, but they all felt meaningless to me.

This game could benefit from landmarks that act as checkpoints. These landmarks could be big floating islands with some kind unique shape or structure. Gameplay wise, the landmarks would give the player an understanding of where he/she is in the level (i.e. progression). Between each landmark/checkpoint, you could introduce some kind of new challenge or twist. Art wise, these landmarks could give the player a moment to take in the world you crafted. You're models feel alive and an interesting environment and subtle story will greatly improve your game.

Thank you for the feedback!

God, I love the feeling of getting on a good run with this. Building up speed bouncing between walls over a bottomless pit is pretty dang entertaining.

We had an absolute blast playing your game!!  We would love to see more levels added, if you guys continue with development!!

Thank you for playing AND making an entertaining video :D

It is no problem, as you saw we had a blast!!  Bonus, did you see the death counter we put in it...?

Yeah, 24 times is a lot! Your playthrough gave us some ideas on where the player might get stuck.

This is acutally a really great and potential game, so here is a list of things I would like to see on the next update:

- Custom bindings: Same as above, I'm used to using Mouse-wheel to jump, but the game force me to use Space.

- Custom crosshair?: You know what I mean right?

- Low/High graphics option: My computer can run it smoothly but my laptop can't, I think you should add this to the game becasue there might be some players with potato computers but still want to play the game.

- "Back to Main Menu" and "Settings" button: During the game, when I press Esc I only see "Return" and "Quit", so that means I have to exit the game and launch it again in order to change the settings of the game.

- Better UI?: I think the font and the UI seem a little bit disappointing if compared to the gameplay and the graphics. The font you are currently using for your game is kinda like a modern, business-ish font, so I would suggest using a cute handwritting font or a sans font. And the button UI looks like some low-effort rectangles and circles created using MS Paint (please don't take this too seriously :>)

- Reloading: I don't know if you were intended to put infinite ammo in your game or not, but I think there should be some "reloading" in the game tho.

- Death transition thingy: When the player dies, there should be some transitioning (blacked out, whited out, red screen, bla bla bla) rather than a roughly respawn animation.

- Stuck spots: The only map in the game has some stuck spots, you should fix those :>

Those are just my opinion, sorry for the wall-of-text and bad english, really looking foward to see what the next updates will have :>

Thank you for your feedback! We will certainly work on the things you mentioned.

is it compatible with a mac?, if not please do so i really love this game idea and would love to play it!!!

Right now there is no mac version, but there is a possibility of it in the future!

Awesome game! Massive potential for more levels, the jump pad doughnuts were a bit off to me, lacked power then again i might not have been jumping right. but i loved the design the movement id love to see more of this!!

Thank you for playing! We will definitely work on this game further.

Game can not be minimized with windows start button on keyboard. game freeze when i fall down. Please add bottom floor.Please update game to directx12 with raytracing support. I can not set antialiasing. Playstation 3 gamepad was not tested. Game is not translated to slovak. God bless you.

Okay, thank you for telling us about these! Right now we are not planning on adding any other language support besides english, but we will think about it in the future.

had a lot of fun with this!

Its was Fun thx for making the Game :)

Really cool game! I like the idea of it being in an old candy factory, the colors and art style was so nice! This game has a lot of potential and I can't wait to see what you will come up with in the future :D

I don't know if you've heard of Game Development World Championship before (gdwc2019) but it's a competition for indie game developers where they can submit their games and it's free! It's great if you want some more visibility for the game and it only takes a couple of minutes to join :)

We will definitely consider taking part!

Reply
The GDWC3 years ago

great fun, has room for improvements. more levels would be a plus, but something as simple as a scoring system for when you kill robots, or a timer to see how fast you can finish the level would add a lot of fun

Thank.We are working on these improvements. Perhaps on June 19 they will appear in the build.

https://www.youtube.com/watch?v=hIiqZS3Btn4   YES I PLAYED THIS GAME WAS HARD BUT GOT IT DONE ...THANKS  :)  SEE MY VIDEO HERE

Thank you for playing and making a video!

I enjoyed that, I like your aesthetic and general feel. The "FPS mechanics" feel sorely lacking though. There's room for improvment but I like what you've got so far

Thanks for the feedback!

I thought the colors were visually pleasing. Also I never thought of a shooter game taking place in such a sweet place so props for originality there.

Glad you enjoyed it, thank you for playing!

Instaling it right now, by the comments, I think it's cool.

- Needs harder enemies, its possible to beat the game without dying of not enough energy;

~ I see this game in the future, on Steam with a Multiplayer platform-racing-fps game.

Thank you for playing and sharing your opinion!

This was an absolute blast! I do think the fps elements were a little under utilized, but I'd still love to see this world and these mechanics expanded upon! Great work!

Thank you so much for playing our game and making a video! 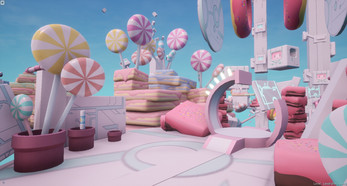 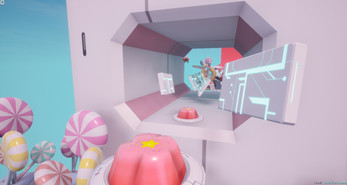 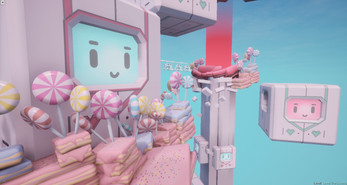 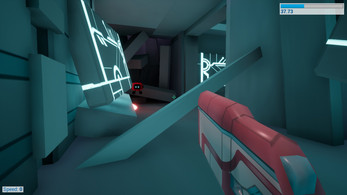 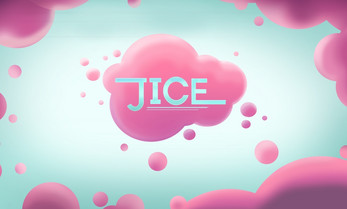